I’ve traveled to quite a few places, both domestically and abroad, since meeting the man I married. And every day I reflect on our journeys together, I can’t help but feel blessed.

One of the most memorable trips I took with Jeremiah was our very first trip together. We had only been dating for MAYBE 4 months, but we were serious. We were already living with each other in a tiny studio apartment in New Rochelle, NY, unconsciously plotting out the rest of our lives together. So a flight somewhere was pretty much par for the course.

We probably would not have ended up in New Orleans so quickly if it had not been for the marriage of two people who I’ve grown to adore. That July of 2009, I found myself at the wedding of one of Jeremiah’s oldest friends Michelle and her love Michael, who have since brought one of the cutest baby boys I’ve ever seen into this world.

In only minutes of meeting Michelle, I could see right away how and why, despite the distance, she and Jeremiah remained so close, and why she was so happy to marry Michael — a Cajun who Jeremiah and I inadvertently ran into during his search for a lost groomsman the morning after his bachelor party (oh the story there!). That was the first time I ever officially met the soon-to-be married man — also known as the moment I knew Michael was AWESOME!

Ever since my one and only trip to New Orleans, I’ve wanted to return. From the energy booming up and down Bourbon Street, to the beignets of Café Du Monde and the actual bourbon that acts as the backbone for some of the most creative whisky cocktails I’ve ever had, there is no reason to stay away from that incredible city.

So in honor of my brief but memorable time in ‘Nawlins,’ in celebration of Michelle and Michael’s union, their growing family and friendship, I channel what I know of Cajun food and share a series of recipes with you inspired by Michael’s home state.

This recipe for Cajun Chicken & Andouille Sausage Jambalaya is the first of three recipes I’ll be sharing this week, fueled by the flavors and ingredients of Louisiana. Because I’m allergic to shellfish and wanted to make sure I could dive in and devour every last bit of this dish (should I lose all self-control), I omitted the shrimp, which is an element that can easily be added to the braise a few minutes prior to serving.

This dish is about as flavorful as one can get, much thanks to the Cajun Spice Rub that is layered throughout the meal. It is one of the most satisfying dishes to come from my kitchen, and it is all done in one pot!

So check out the recipe for Cajun Chicken & Andouille Sausage Jambalaya and bring Louisiana into your home! 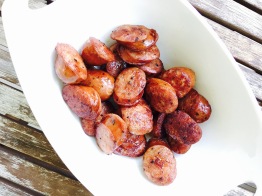 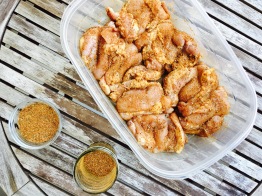 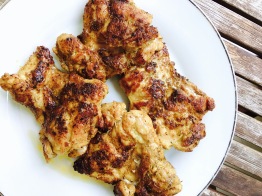 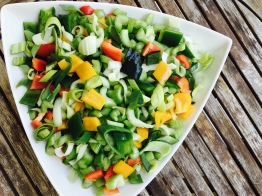 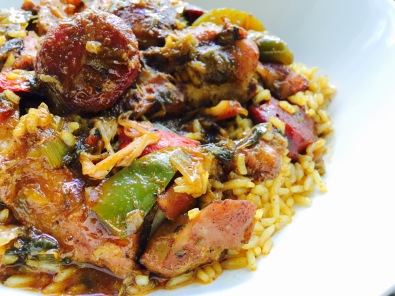 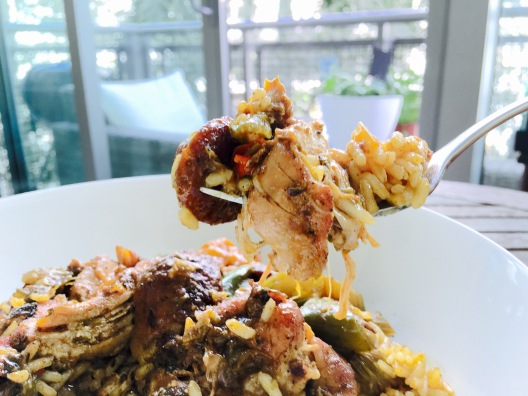 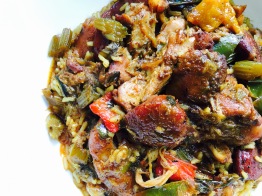 Remove the chicken from the pan and set aside. Add an additional 1 tb of bacon fat to the pan along with the chopped peppers, leeks, onion, celery and parsley. Season with 2 tsp of cajun rub and sauté for 10 minutes, stirring occasionally.

Coat the veggies with the flour and cook off for 5 minutes.

Add the beer and cook for 2-3 minutes until thickened, stirring to deglaze the bottom of the pan. Add the additional braising spices and return the chicken and sausage to the pan. Simmer with the lid on for 1 hour.

*Add your peeled and deveined shrimp in the last 2-3 minutes of the braising, allowing the sauce to cook the shrimp until they are opaque.

Season the chicken stock with the cajun spice rub and bring to a boil. Add the rice and the butter. Stir once to melt the butter. Reduce the heat to low and cook until the rice is tender (15-20 minutes).

Bringing it all together:

Place a portion of the rice in a bowl. Add some of the braised chicken and andouille sausage along with the veggies and braising liquid. Mix to incorporate. Garnish with the parsley and serve while war