When I moved back home to New York from Wisconsin after finishing college ::cough cough:: years ago, I landed in a studio apartment that had the smallest gas range I ever saw. There were four burners, but if a pan you were using was too big, the stovetop might as well should’ve only had one. I was a bachelor, living on my own and still in that pesky old closet in which so many of us gays find ourselves. But I digress. This isn’t a story about my sexuality or dating escapades when I was ::cough cough:: years old. This is a story about how my life was indefinitely changed by Rachael Ray.

When I was living on my own, I spent every weekend watching the Food Network from about 8am until the instructional cooking shows ended (which was usually around 3 in the afternoon). During that time, I would cook. A LOT. By 5pm, I’d regularly find myself with enough pasta to feed a family of 10, a whole roasted chicken and maybe a rack of ribs. I knew no restraint, only that I loved being in that tiny kitchenette, pushing that toy-like gas range to its limits.

The Food Network would play continuously in the background, and it was then that I was introduced to Rachael Ray and her obsession with a kitchen gadget of which I now own 3 — the microplane.

Microplanes are hand-held graters that do more than just shred cheese. Because of the small size of the holes, microplanes can be used to zest citrus fruits as well as mince garlic finer than any knife. There are a number of different kinds of microplanes to choose from — each one giving you a different degree of grating. 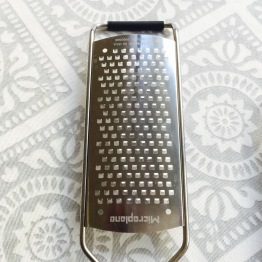 Here are a few things you should know about them. 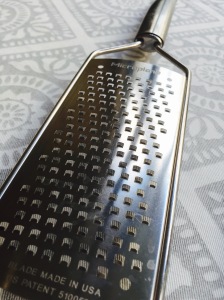 THE COARSE GRATER is best used for:

Hard cheeses – parmesan, pecorino romano and manchego (to name a few) can take some time to melt and may not alway infuse smoothly if you’re trying to incorporate them into a sauce. This microplane leaves your shredded cheese light and fluffy, which allows the cheese to melt much more easily.

Garlic – run your knife through a clove a half dozen times and you may still be left with chunks unappetizing if consumed raw. When making dishes like hummus, this microplane will mince your garlic evenly while still keeping enough of its texture to let you know visually that it is there in the dish without being unpleasant to your tastebuds. 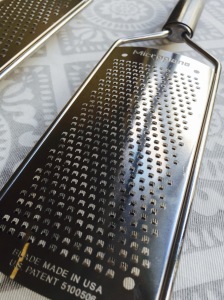 THE FINE GRATER is best used for:

Ginger – though there are instances where ginger is sliced and tossed into dishes, this microplane offers just the right amount of coarseness to help you break down the fibrous root, leaving you with an almost textureless mound bursting with that distinct ginger flavor.

Garlic – much like the ginger, grating garlic using this tool will remove any true texture from the herb itself. This allows for an even more seamless integration into whatever dish you are making. 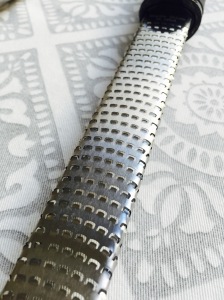 THE ZESTER is best used for:

Citrus – fruits like oranges, lemons, limes and grapefruits all have skin packed with flavor. This tool allows you to remove the outer layer of the skin while leaving behind the bitter pith. By gently swiping the fruit along the metal in the direction away from the handle, you harbor the flavor of the fruit without its juice, which (depending on the fruit) can be quite sour.

Nutmeg – whole nutmeg is hard, and this zester is the tool to use when wanting to get a little bit of that flavor into the dish you are making. A few gentle scrapes across the microplane will remove some of the nutmeg, offering you the spice in a powdery consistency. It is great to use when putting together béchamel sauces.

Chocolate – all the microplanes work well on this item. They will help you infuse dishes with the fine shreds of sweet goodness as well as garnish beverages and desserts. Be sure the chocolate is cold and solid before running it across the microplane or else you might end up with a mess on your hands.

My experience with my microplanes has been a life-changing one in the kitchen. My prep time has been reduced tremendously, especially when I’ve got dishes that call for lots of garlic and ginger. The flavor in my dishes have reached another level because of the microplane’s ability to help whatever you run across it completely infuse into the dish you are making without getting lost. And they look cool, which is always a plus.

So thank you, Rachael. And if you don’t own a microplane, I suggest you get on buying at least one ASAP. Trust me when I say it will not be your only for long.